Since the performance indicators of the current VoIP service fail to meet the quality of the existing circuit domain voice service, and the IMS needs to be deployed throughout the network, three different LTE voice solutions are formed on the basis of the existing network: based on the dual standby terminal. Solution, CSFB and VoLTE. Both CSFB and VoLTE are LTE voice solutions defined by 3GPP, both of which are clearly defined in the 3GPP specifications. VoLTE requires comprehensive support and optimization of terminals, wireless and core networks. From the current point of view, the implementation complexity is large. CSFB is a relatively simple voice solution proposed when the industry does not implement VoLTE.

The dual standby terminal can stand in the LTE network and the 3G/2G network at the same time, and can receive and transmit signals from both LTE and 3G/2G networks. The essence of the voice solution is to use the traditional 3G/2G network, which has nothing to do with LTE.

A voice solution based on dual standby terminals is a relatively simple solution. The terminal chip can be implemented by two chips (1 3G/2G chip and 1 LTE chip) or a multi-mode chip. There is no interoperation between LTE and 3G/2G mode, and the terminal does not need to implement different system measurement, technology. Simple to implement.

The main idea of â€‹â€‹the CSFB solution is to re-access the LTE network back to the 3G/2G circuit domain when the user needs to perform voice service, and initiate or receive voice services according to the service process of the circuit domain.

To implement CSFB, an SGs interface needs to be established between the MME and the MSC device of the 3G/2G network (shown by the purple line in Figure 1). SGs association plays a bridge role in CSFB technology, and can connect two different systems to realize the continuous voice service between users. The so-called SGs association is established for the user, that is, the address of the MME of the user is stored in the VLR, and the address of the VLR of the user is also stored in the MME. 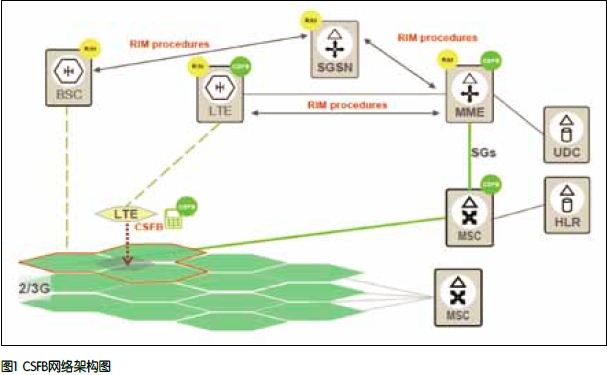 A terminal supporting CSFB must have multi-mode capability, and can access the EPC through E-UTRAN or the CS domain through GERAN/UTRAN. CSFB capable terminals must be able to perform joint RAU/LAU attachment, location update, and detach procedures.

The CSFB idea is to fall back from the LTE network to the 3G/2G circuit domain when the user needs to perform voice service. The way to fall back is to release the wireless link of LTE, and carry a redirection field in the release message, indicating the system and frequency point of the terminal re-access. This way of falling back, commonly known as relocation. The relocation method is characterized by simple implementation and small amount of transformation to the original network; the disadvantage is that the delay is relatively large.

In order to minimize the amount of modification to the original network, but at the same time to reduce the delay of re-access, the 3GPP specification proposes the DMCR function. The DMCR (Deffered Measurement Control) function is to let the UE fall back to the 3G network to read only part of the system message during the call, without having to read all the system messages before the call is established, thereby reducing the call setup time. However, this function can only be used for 3G networks, and 2G networks do not support DMCR.

Another method for supporting a terminal to fall back from LTE to a 3G/2G network is PS domain handover. This kind of scheme has a small delay, but the support is difficult, and the existing terminal basically does not support this method.

From the perspective of current technical support, industrial realization, performance, etc., the "relocation method with system messages" is widely accepted by the industry.

The general process of a user initiating a voice call in an LTE network is that the calling user sends a service request to the E-UTRAN network and switches to the destination cell in the 2G/3G system with the help of the EPS network, and the user is re-accessed. Subsequent CS services are completed after the CS domain. See Figure 2 for the specific call flow. 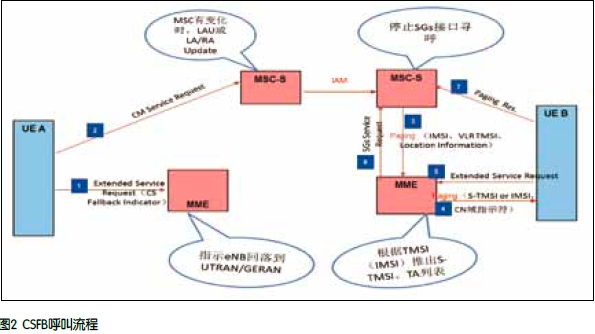 When the LTE network reaches full coverage, the VoLTE voice solution will become the ultimate solution for operators. VoLTE is a standard LTE voice solution defined by GSMA. Its core service control network is an IMS (IP Multimedia Subsystem) network, which implements end-to-end packet-based voice and video communication services in conjunction with LTE and EPC networks. Through the control of the IMS system, the VoLTE solution can provide voice services and supplementary services equivalent to circuit domain performance, including number display, call forwarding, call waiting, conference calls, and the like. 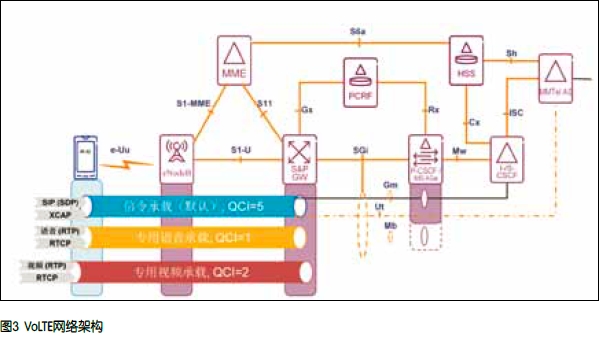 The IMS domain mainly performs functions such as CSCF call control. The IMS system cooperates with the EPS network to provide voice services and supplementary services similar to the circuit domain, including: number display, call forwarding, call waiting, conference call, and the like.

Service control based on IMS core

The core idea of â€‹â€‹the VoLTE voice solution is to use IMS as the service control layer system, and the EPC is only used as the bearer layer. With the IMS system, not only voice call control and other functions can be realized, but also multimedia sessions can be charged reasonably and flexibly. The operator can provide different tariff standards based on the user's QoS for different content of the user's service (for example, a VoIP session or a web page browsing or an instant message). In addition, IMS defines standard interfaces for service developers that enable operators to deliver services in a multi-vendor environment, avoiding binding to a single vendor to acquire new services.

VoLTE is an end-to-end voice solution under all-IP conditions. It involves terminal, wireless, PS, IMS, and CS technology domains, and is designed to replace circuit domain voice. With the VoLTE voice solution, the following requirements are imposed on the terminal domain, the wireless domain, and the core network:

The core network needs to fully deploy the IMS system. The IMS domain needs to provide call control such as CSCF and interworking functions such as HSS, MMTel AS and IP-SM-GW, MGCF/IBCF/TrGW, and devices that need to introduce LTE, S/P-GW, MME, and Provide bearer channel and QoS control capabilities for VoLTE.

From the perspective of the service implementation process, if an EPS system user wants to implement end-to-end VoIP services, it must go through EPS attachment, IMS registration, calling process and called process (including proprietary bearer and IMS layer signaling interaction). Several processes. A typical VOLTE call flow is as follows.

LTE network attachment: Attached under the LTE network, the UE establishes a signaling bearer (the IMS APN is configured in the UE).

IMS registration: The UE registers with the IMS network according to the P-CSCF address obtained in the PS attach procedure; the IMS network authenticates the UE, the UE completes the registration, and the network saves the user's contact address for subsequent incoming addressing.

MO process: The user dials the called number, triggers the UE to initiate the calling process to the IMS through the authenticated connection; the P/S-CSCF routes the call to the MMTel AS (AS of the telecom supplementary service), and returns to the S after the service processing ends. -CSCF.

With the gradual maturity of LTE network technology, the network architecture of mobile communication systems will gradually evolve to EPS, and voice service IP is also an inevitable development trend of voice services. However, realizing VoLTE will be a long process. Therefore, circuit domain voice services will coexist with packet domain services for a long time; voice solutions based on dual standby terminals and CSFB-based voice solutions will play an important role in the transition phase of network evolution. Ultimately, VoLTE-based voice solutions will be the ultimate solution as LTE and IMS networks are fully deployed.

At present, mobile operators are preparing to launch LTE services without rushing to deploy VoLTE. LTE overall services and industrial chain supply issues will take time to improve. At the same time, we should also see that VoLTE does not provide any compelling services or business opportunities beyond the data business. Although VoLTE will increase network efficiency and save costs, operators should continue to focus on LTE data services in the short term.

However, other operators are not eager to develop VoLTE because of the judgment of real problems, including service tariffs, support for emergency calls and flexible interchange between calling LTE and other networks, and low support rate of terminal equipment.

We believe that the opportunity to gain a first-mover advantage is the original intention of operators to offset the initial problems of VoLTE development. However, facing the above substantive issues can help operators gain more control in adopting new technologies.

High efficient charging speed for Sony laptop, stable current outlet can offer power for the laptop at the same time charge the laptop battery. The best choice for your replacement adapter.We can meet your specific requirement of the products, like label design. The plug type is US/UK/AU/EU. The material of this product is PC+ABS. All condition of our product is 100% brand new.